On a cloudy November day, some twenty participants met at Geneva Industrial Services (SIG) to visit the new solar thermal power plant SolarCAD II. This plant produces more than 0.5 GWh of energy per year, which is the equivalent of almost 70% of the hot water needs of the site where 1,200 employees work.

With a solar collector field of 800 m2, the produced heat is injected into the largest district heating network in the canton of Geneva (60,000 households are connected to it). Thanks to an innovative technology, the collectors heat the water in a closed circuit between 75°C and 90°C all year round.

Produced by the Geneva-based company TVP Solar SA, the collectors of this new solar thermal power plant are flat and insulated by a vacuum that allows the maximum amount of solar energy to be captured throughout the year. This new technology allows more energy to be produced in winter than with conventional collectors and at a higher temperature, even in bad weather.

The participants were very interested in the visit itself and the detailed explanations given by a SIG representative and one from TVP Solar.

The site can be visited by a 360° virtual tour here. 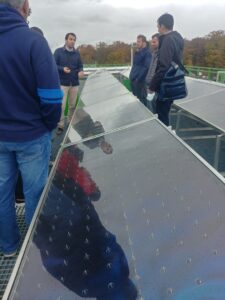